Luxury and Yet Delicious at House Restaurant, E@Curve

There are lots of restaurants out there for fine dining but with great disappointment in the sense of taste while you still need to pay for a not very affordable price. I have been long heard of a place called House with the great quality of food they served and comes with a price. It is not only a restaurant, but also a bar or wine post for people to hang out on weekends. 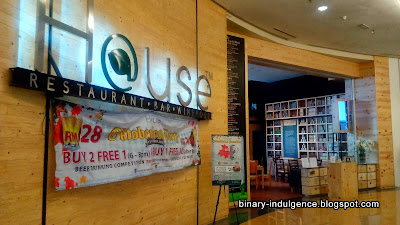 To escape from crowds that usually happened at night in the House, I have chosen to come on the day time. So, what's for lunch? The waiter come towards me with two menus - one is for foods, another one is for beverages. As I know although House priced its food in the range similar to Chili's and TGI but the size of the portion is never similar in size. So, in my mind, I already planned to order 2 different courses. What catch my eyes on the first sight is lobster - oh, sorry, RM100++ just for a lobster, I will be broke for that if I order two. As what I have mentioned before, one is never enough. I still doubt that it is only a baby lobster, as I know RM100++ for a lobster is consider cheap.

Ok, my decision is a Baked Atlantic Cod Fish (main course), Penne Pasta with Salmon (the secondary), and a Mango and Lime Lassi. 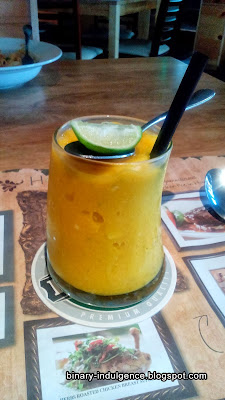 Waited for approximately 10 minutes, they served me with the Mango and Lime Lassi. The drink is not purely liquid - it is semi-solid. Alright, in common sense, if you are given a lime for your food or drink, the action you are going to do is to squeeze that lime on it. Before adding lime into it, the taste is just a little sour, and after adding the lime, the taste is much better, however doesn't really satisfy me. Disappointment? Not that serious - it was just slightly above average. It was still early, around 12pm and not many customers there. However, customers at that time were mainly Europeans. I saw two European ladies ordered the same drink - maybe is a all time favourite - Berries Booster. I quickly order it for a try. 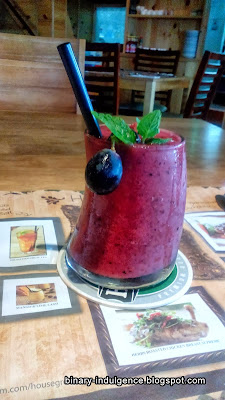 Another 10 minutes gone, Berries Booster served right before the food. The fruit they served with the drink is not a berry, but a blackcurrant. Nevermind, it still taste like berries with blackcurrant. I have no idea whether they use real berries to blend or mixed up with the berry syrup but seeds of the fruits were break into simpler substance. 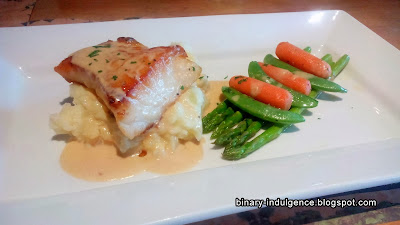 Here comes the main course - Baked Atlantic Cod Fish. As you can see, it has green asparagus with baby carrots, and truffle cream covering the baked cod fish with mashed potato beneath. Pairing the fish with the mashed potatoes, the feeling in mouth is just between the half solid and soft with moderate creaminess. The adequate of saltiness with the slight blandness of potatoes matched very well in taste.The baby carrot is crunchy and it is really easy to bite and chew. The green asparagus must be freshly picked before cooking because if the asparagus is too old, the stem is hardly to be chewable. Both of the asparagus and carrots must have soaked with boiled water to make it easy to bite and chew. 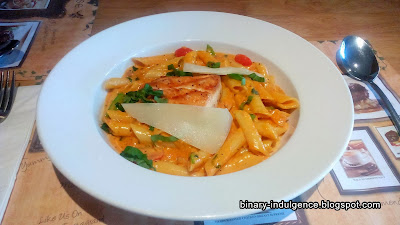 Baked Atlantic Cod Fish priced at RM52.9, Penne Pasta with Salmon priced at RM29.9, ordered a Mango with Lime Lassi at RM15.90 and Berries Booster at RM16.90. Total included the tax and service charge is around RM134.00. Normally for guys, a portion of main course will never filled up your stomach. For girls, maybe one portion is just enough.
Posted by Binary Indulgence at 6:00 AM No comments:

Hotel breakfast in my experience is nothing worth to say about. Bread, baked beans, fried mee, local delights like nasi lemak, char kuey teow, and laksa were normally served in a buffet style. Whenever mentioning these food names in a hotel menu, it would not really stimulate our appetite. Holiday Villa Subang had given me a new impression of hotel breakfast.

When I walked into Palm Terrace, the name of the restaurant which offering hotel breakfast, I really didn’t expect much. As usual like any other local hotels, they served American breakfast, local delights (nasi lemak and char kuey teow), pastry, fruits and etc in a buffet style. 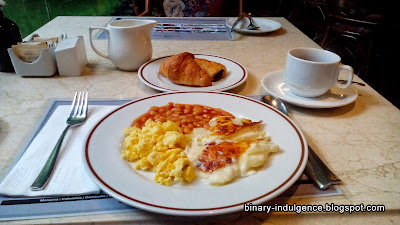 My first round of pickups were scrambled eggs, baked beans, baked cheese on top of potatoes, croissant and a chocolate puff. The scramble eggs textures were good in the sense when you chew on it, not too soft and wet. And it didn’t taste bland at all. It is a little mild salty in mouth – a great experience. Ok, now is baked cheese on top of potatoes. When tearing off the cheese which covering on top, you will see vapour unleashed from the potatoes. Hmmm~, looks warm and fresh with nice visual effect. Pairing with the baked cheese and potatoes, what’s the expectation in mouth is the feeling of creaminess and the taste of saltiness covering over the blandness of the potatoes. Especially when pairing with the scorched part of the cheese, you would have a slight crispy with more concentrated salty taste. The baked beans were just so so but surprisingly the taste is not too strong. Who knows maybe is not from the can food. 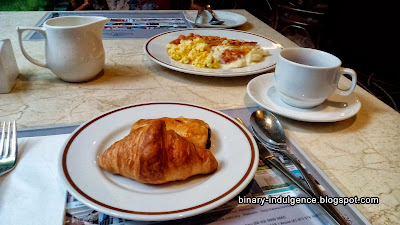 What is feeling and taste after a bite on croissant when you first bought in bakery shop? Maybe it would be crispy but a little hard to tear apart, right? It is a little surprise for me when I take the first bite. It is soft, crispy and with effortless the bite quickly tore the croissant into two parts. And then the mild taste of the unsalted butter begins to conquer your tongue. The aroma of the croissant spread internally in my mouth to the nostrils, stayed for a couple of seconds and faded. I never expected the croissant was soft enough and really enjoy each bite to the max. Next, the chocolate puff did not give much of its tastiness to me based on its appearance. When taking a bite on it, you can feel it is a little crisp, and when you taste the chocolate together with the puff, the taste is unexpectedly great. It has rich chocolate taste but balanced with the taste of the puff. So, if you eat the chocolate separately from the puff, the taste of the chocolate would be stronger. However, if you taking the bite together with the puff, it is just nicely fit. The puff and the croissant were not greasy at all. I didn’t go for bread such as white bread, wholemeal bread or brown bread because these breads are usually we can have in a breakfast with butter - too common or non special at all.

My second round pickups were char kuey teow, hash brown, fruit salad, cheese and chicken ham. Char kuey teow is one of the famous local delights. The taste of the pepper might be just slightly stronger but not really spicy at all. The hash brown is very crispy and tasty compare to any other places which I have tried before. Wonder where they got it from. Nothing “wow” to say on fruit salad but the cheese and chicken ham is a little worth to say. They provide real cheese which you need to slice it with a knife. The chicken ham is used to fold over the cheese - great pairing.

Generally, judging by the looks of the food, it didn’t have much present of delicious on it. However you wouldn’t know the surprise beneath from its appearance. The food taste of this hotel breakfast is never extreme. Not too salty, not too sweet and not to whatsoever it will go extreme in taste. After having the meal, my tongue and throat doesn’t feel dry or thirsty at all. This may prove that the food didn’t consist any chemical seasoning additive or so called MSG (monosodium glutamate). They got the real cook in the kitchen with real skills.

The price for the buffet breakfast is RM 48++ excluded from service charge and government tax. Normally if you have booked a room for a night, the walk-in for the hotel breakfast is included without any extra charge. However, if you want your breakfast to be served to your doorstep, it will not be served in a buffet style and there will be a charge (correct me if I am wrong). 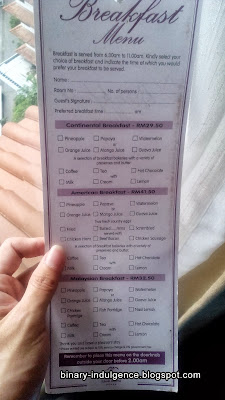 For direction to Palm Terrace Coffeehouse at Holiday Villa Subang, please refer to the map below. You can direct access to the restaurant from the lowest floor of the carpark building.


View Larger Map
Posted by Binary Indulgence at 12:29 AM No comments: