Hey everyone how have you all been? It has been awhile since I blogged last before Chinese New Year if I am not mistaken. So this time I am back with some weight gained and some got myself a slight of sickness due to the recent change of weather from hot and cold or vice versa, so remember to drink tons of water during these sudden changing weather.

Although the weather is bad but it cannot stop my friends and me to go for some nice restaurant to unwind ourselves from the hassles of our weekday challenges from our jobs. 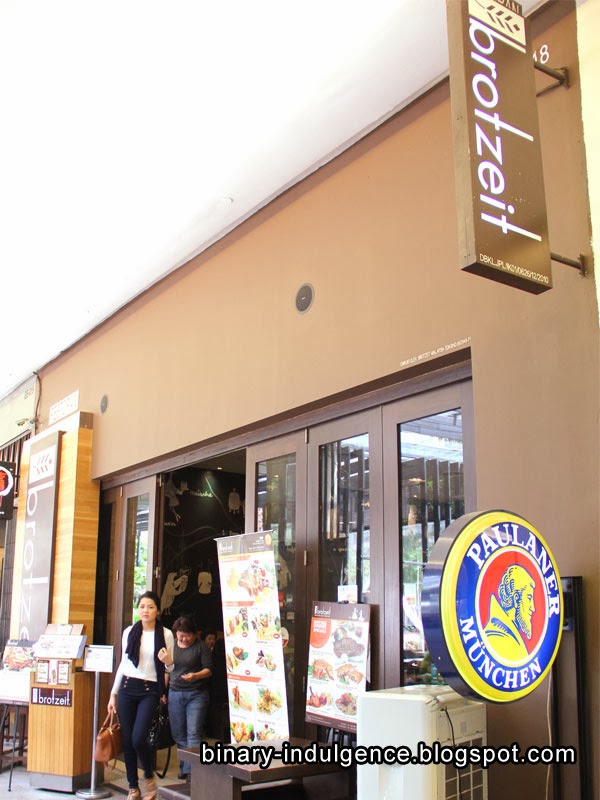 Here we are ended up in Mid Valley megamall Brotzeit, a German bier bar & restaurant. Their name of the restaurant has meaning according to them the word “Brot” and “zeit” in German both literally meaning “Bread time” it is a Bavarian expression, referring a snack accompanied by bier, sounds like a “alas perut dengan bir” to me in Malay, but anyway due to the fact we have not yet dine in this restaurant before we had decided to give it a try. 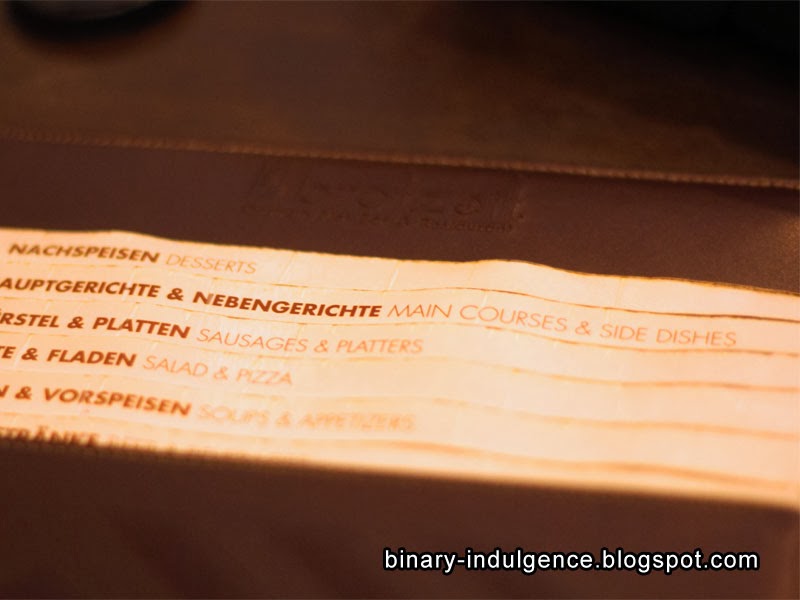 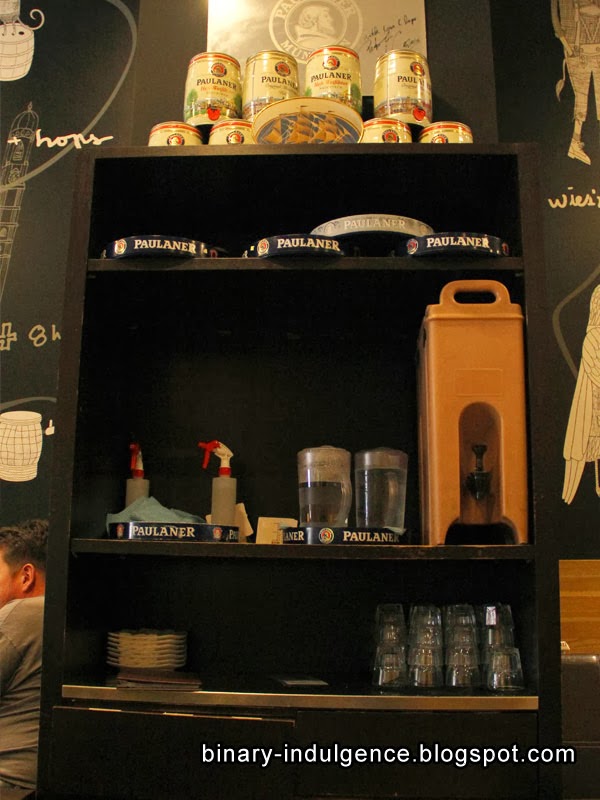 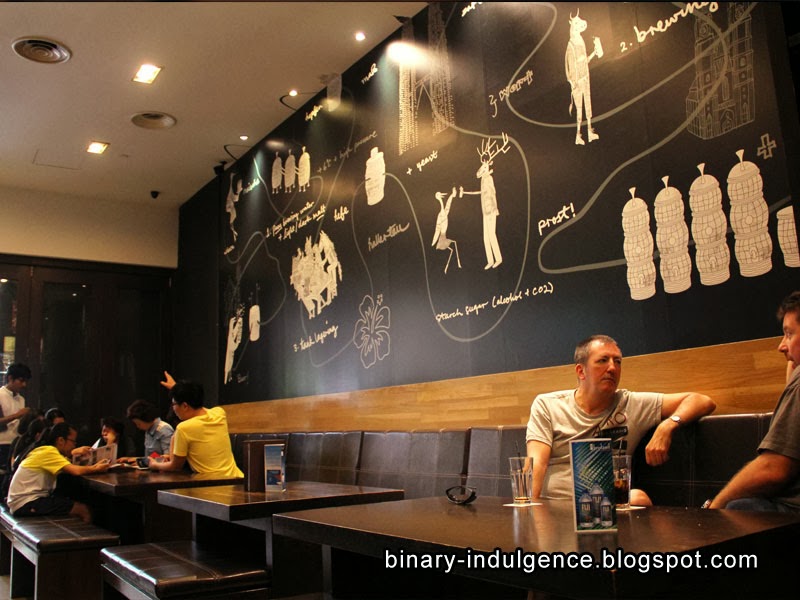 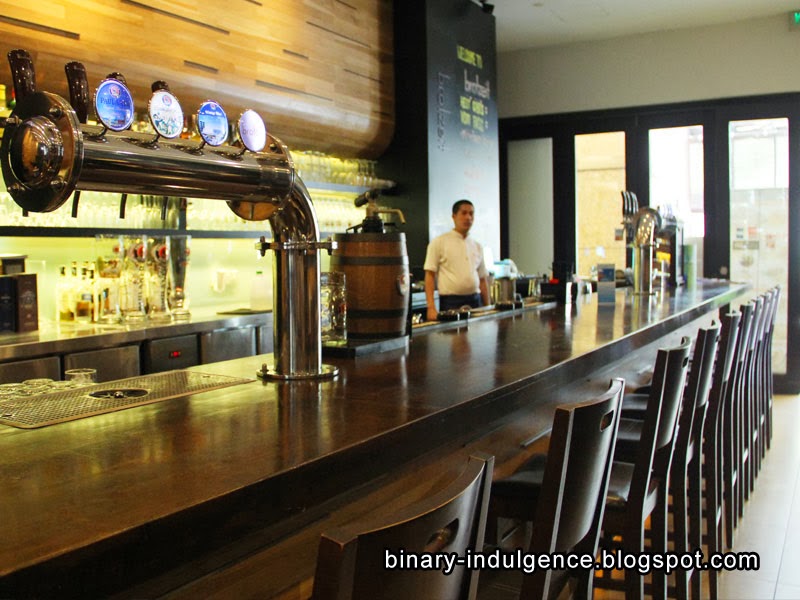 They have an area for beer drinkers only, how cool is that but unfortunately we did not have the mood to have beer in the afternoon and furthermore, we are not really good in appreciating beer. I do notice their featured beer is from Paulaner Brewery, a German brewery, and ranks number 8 among Germany’s best selling breweries, maybe I will try it out next time and for those who likes beer and happen to be there, do not miss it. 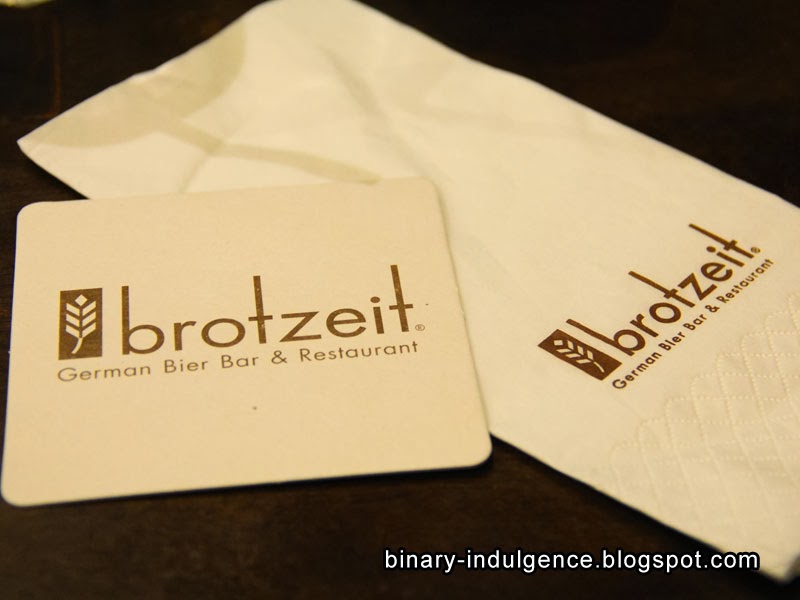 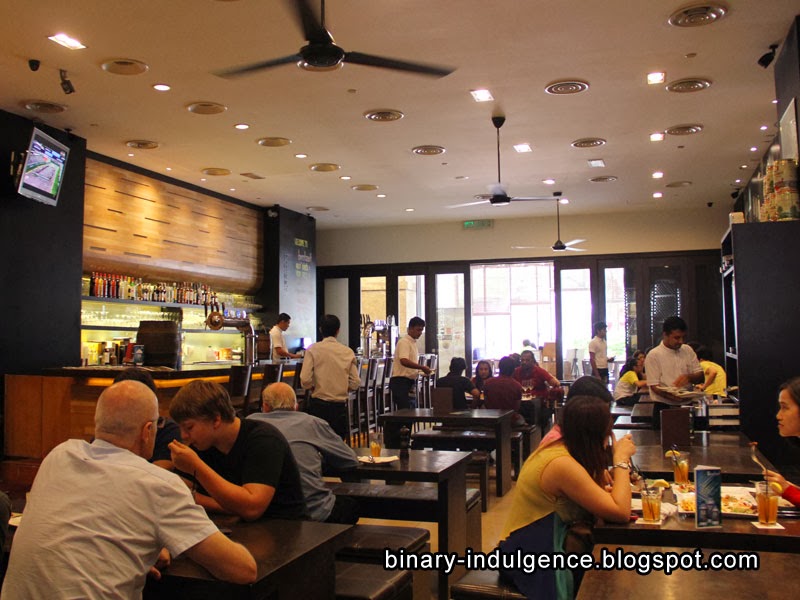 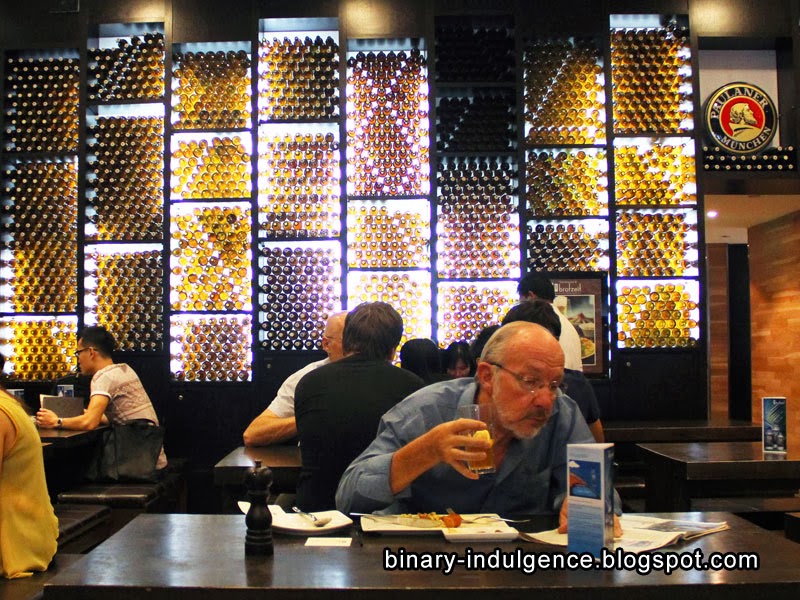 I like the beer bottle made interior wall with the light illuminates from behind, did not thought bottles can be decorated in such elegant way. 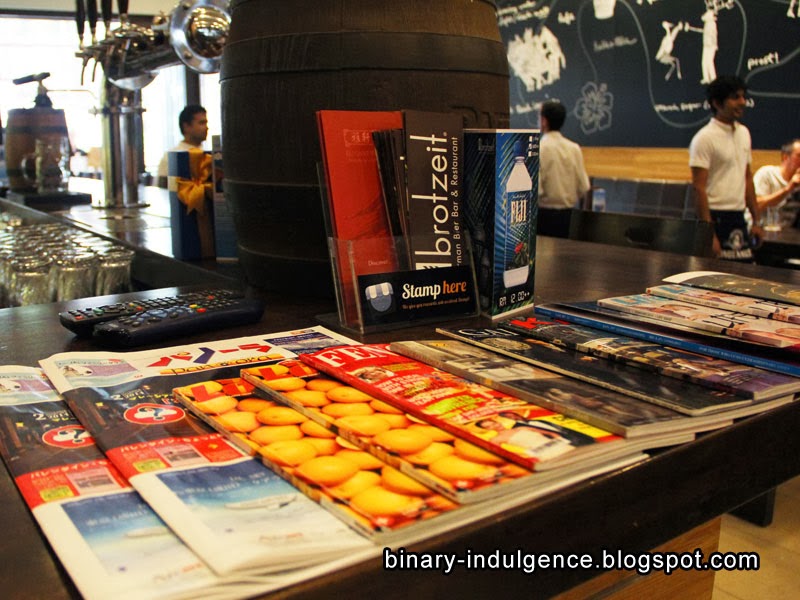 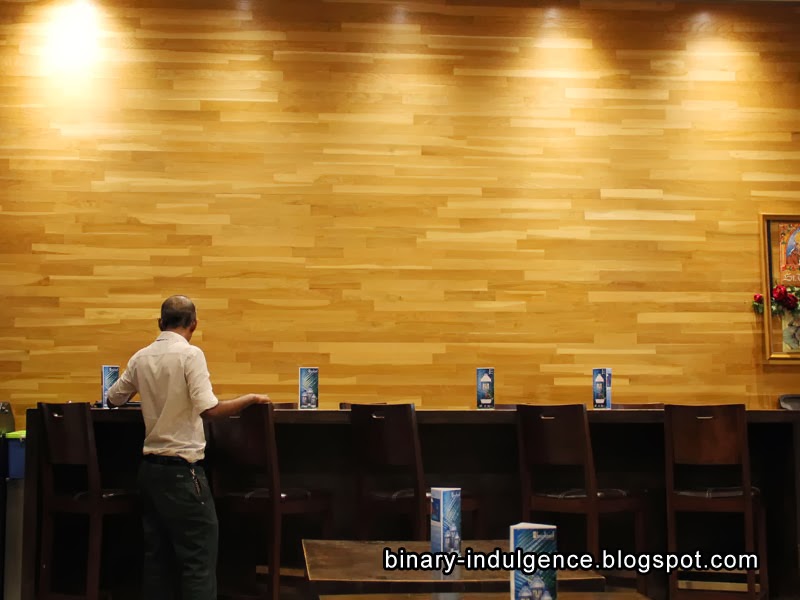 We sat down and order our food:


*government tax and service charges are not included for the above prices.

For the main we chose, there are a lot of side dishes to choose from, other than what we had selected, there are:


After we ordered, we just simply chit-chatting while waiting for about 15 minutes then the dish was served 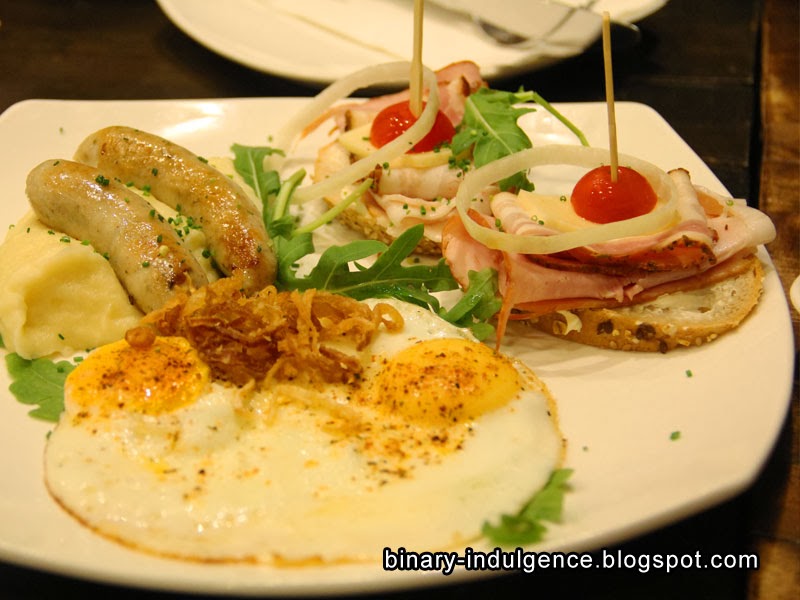 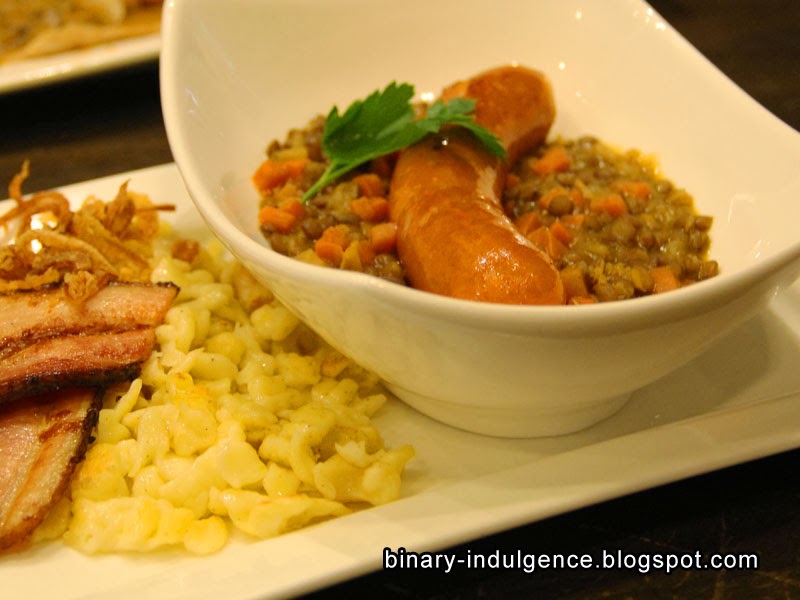 I felt excited and took the photos once the food has arrived because it looks so inviting, after I finished shot the photos, one of my friend asked me to reconfirm whether this is the side dishes we ordered or the waiter had mistaken served.  After I reconfirm the dishes, the waiter apologized and took back the food to the kitchen and then only we found out the food was actually for the table behind us, totally awkward.

After few minutes our soup of the day is served 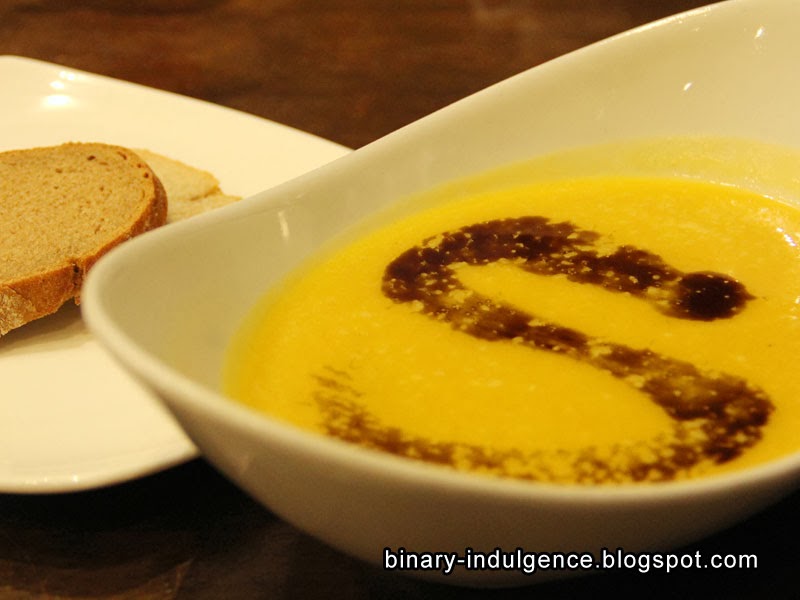 It served in a soup with two pieces of bread. We noticed a black “S”, a symbol from Superman on the surface of the yellow soup. The “S” is made of olive oil and the yellow soup is a pumpkin soup, I stirred gently to make it evenly mix with the soup and then only we shared the taste. It has a nice soft mellow taste of pumpkin, lip-smacking after taste.

After that brotzeit platter and the two side dishes are served, the brotzeit is seriously BIG in size 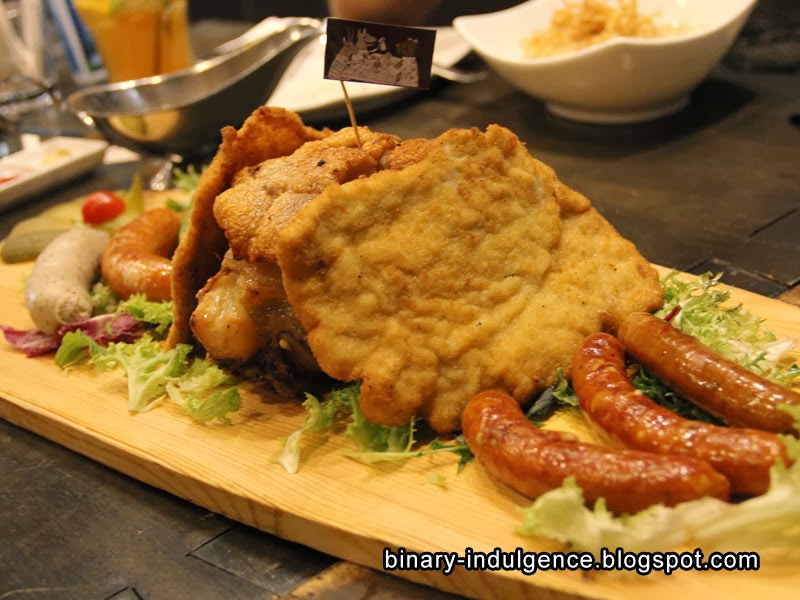 As you already see the composition of the brotzeit platter, the center round in shape is the pork knuckles covered by two pieces of pork schnitzel, following three sausages for both sides a few types of vegetable such as pickles, cherry tomato, cabbage as garnishing purposes.

We start off by trying each of the sausages, there are cheese filling sausages, black pepper flavor sausages, and the Weisswurst sausage which is pale beige in colored made mainly from veal.

The pork schnitzels are thin and can be slice and chew easily, the reason behind is that it is a boneless meat and thinned by a hammer like tool, the meat tenderizer, this pork schnitzel has less feeling of tender on the meat might because we did not try it first while it still hot.

Lastly the pork knuckle, the crispy skin is highly hard to chew and oily, person who wanted to burn their calories every second is not recommended. The meat is a little dry or me, it is not juicy as I thought it would be. Not suitable for my likings to be honest. 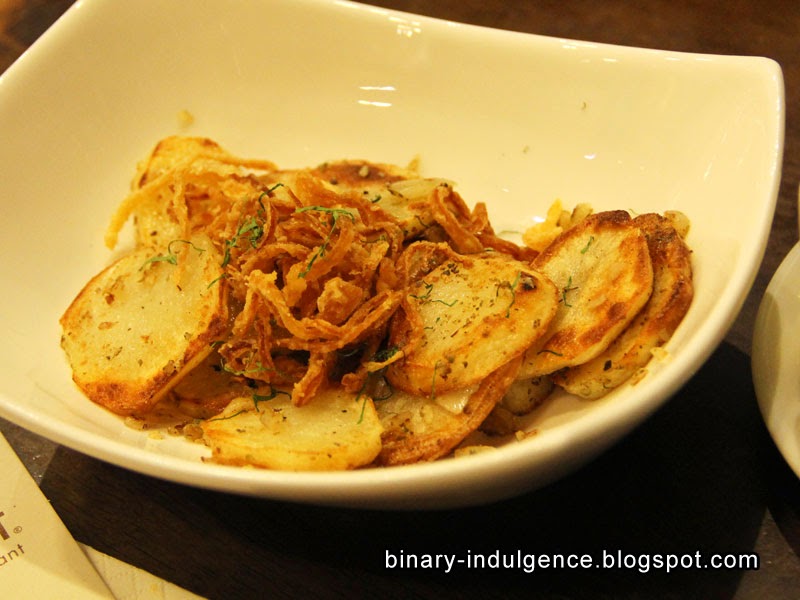 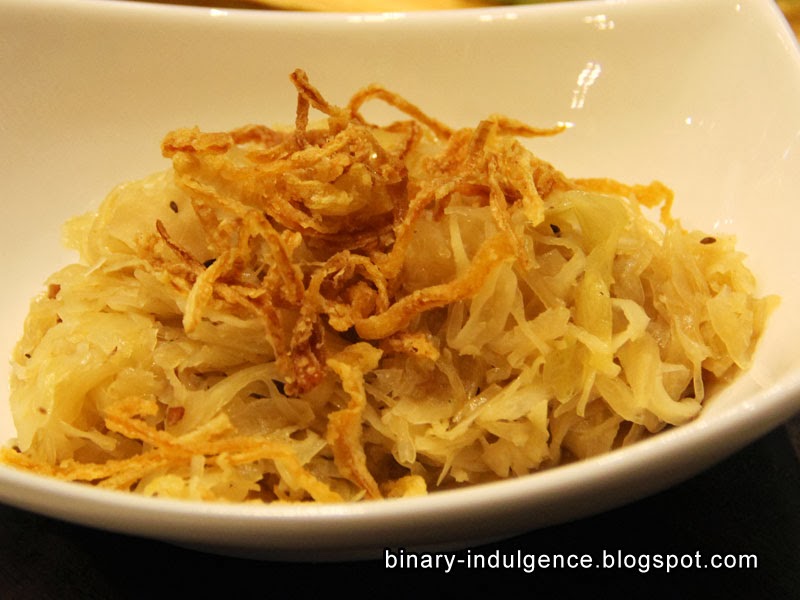 The two sides dishes are nice, especially the roasted potato. The German cabbage is kind of weird for me, I think it is a preserved cabbage due to its sour taste as appetizer.

After we finished our food and drinks, we sit there a have a rest and then we talk about the food, the pork knuckle especially, we all agreed that the Chinese way of doing this dish is more delicious than what we just have here maybe because we are used to it or we prefer the pork knuckle meat to be more juicy and tender to bite with. Anyway you guys should try it out yourself.

Below is the google map of the place:

Posted by Binary Indulgence at 6:37 AM No comments: